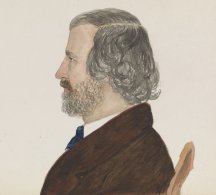 Volume 27 opens in October 1859 with the Brownings just returned to Florence after a summer in Siena. They spend less than two months at Casa Guidi before travelling to Rome, where they occupy rooms at 28 Via del Tritone. On 12 March 1860, EBB’s Poems Before Congress is published; the American edition, Napoleon III in Italy, follows a month later. This small collection of eight poems receives harsh criticism from a number of London journals and newspapers, mainly for her devotion to Napoleon III. The notice in The Athenæum, written by the Brownings’ friend H.F. Chorley, enrages RB for its dismissive nature and mistake about the poem “A Curse for a Nation,” a condemnation of slavery in America. Chorley, among many other reviewers, presume the “curse” is for England rather than America. Appendix III presents all reviews of the book located for this period. Meanwhile, through the winter EBB speculates about the future of Italian independence. In March plebiscites are held in Tuscany and Emilia (the latter formed out of Parma, Modena, and the Papal State of Romagna) that return overwhelming majorities for union with Piedmont under King Victor Emmanuel II. As the volume closes, Garibaldi and his famousThousand have sailed from Genoa and are preparing to land in Sicily.