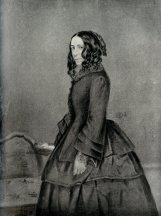 As Volume 25 opens with the Brownings at Florence, EBB is unhappy about Robert Lytton’s inconsiderate treatment of her friend Isa Blagden and writes that he has acted “even below the par of the ordinary male creature.” In January, the Brownings learn of the attempted assassination of Napoleon III, and EBB believes, mistakenly, that Mazzini is behind it. In May, her new friend, the wealthy American Sophia Eckley, returns to Florence from the Middle East, and their relationship becomes more intimate. At the end of May, Nathaniel Hawthorne and his family arrive in Florence and soon afterwards call on the Brownings. Appendix II includes the Hawthornes’ accounts of their visits. Because of the poor state of EBB’s health, she is ordered to the French coast for sea air. The Brownings spend the summer at Le Havre, where she grows stronger. They are joined by members of EBB’s family, as well as RB’s best friend, Joseph Milsand. RB writes two poems, one of them probably “A Likeness.” At the end of the Brownings’ stay, a photograph is taken of EBB that will be engraved for the fourth edition of Aurora Leigh (1859). William Michael Rossetti offers to supervise the process. The Brownings return to Florence in late October and only a month later travel to Rome, where they will spend the winter. This volume includes a biographical sketch of the American sculptor Harriet Hosmer and RB’s 1858 account book, which lists the Brownings’ expenses for the first six months of the year.