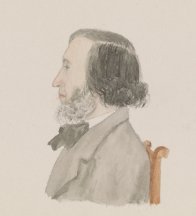 Volume 24 begins with the Brownings still at Casa Guidi. They read the latest reviews of EBB’s Poems (1856) and Aurora Leigh (1857), including one by poet Coventry Patmore, known for his patriarchal views on women’s rights. The Brownings’ son, Pen, turns eight in March, and in early April he begins studying piano with an Italian master; RB provides lessons as well. That same month comes word of the death of EBB’s father in his 72nd year. EBB is devastated by the news. He had never reconciled with her, Henrietta or Alfred, the three children who married without their father’s consent. They receive nothing from his will. The Moulton-Barrett home, 50 Wimpole Street is broken up; personal effects are sold at auction or divided among the unmarried children. EBB is melancholy and lethargic. At the end of July, the poets escape the heat of the city and travel to Bagni di Lucca, taking rooms in Casa Betti, where they spend the rest of the summer and early autumn. They are joined by friends Isa Blagden, Annette Bracken, and Robert Lytton, all of whom stay in a nearby hotel. Lytton becomes seriously ill with gastric fever and keeps to his bed for more than three weeks. After the Blagden party returns to Florence, Pen is struck down with the same illness but recovers more quickly. The Brownings return home on 7 October. As the year ends, EBB becomes disenchanted with Lytton. She faces the coming winter in uncertain health.